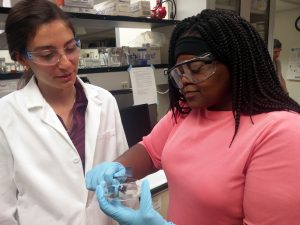 Brielle Weiner (left) and Stephanie Barrow, who first worked together in Grenoble, France in the Picart Lab during summer 2017, consult in the Lee Lab at Penn in May 2018.

Stephanie Barrow spent the month of May in Daeyeon Lee’s Lab in the Chemical and Biomolecular Engineering Department to work on the conditions for developing layer-by-layer assembled polymer films. This extension of her work in Catherine Picart’s Lab at the Laboratoire des Matériaux et du Génie Physique in Grenoble, France during the summers 2016 and 2017 will provide a basis for using the films in animal model microbiome studies at Alabama State University, where Stephanie is a doctoral student. While in the Lee lab, Stephanie had the opportunity to work with REACT undergraduate, Brielle Weiner, and graduate student, Neha Manohar, who had also been at GIANT when Stephanie was there.