Grenoble, France – the capital of the Alpes – was awarded the European Green Capital for 2022. Each year, the European Commission recognizes and rewards a city which is an example of excellent environmentally friendly urban-living. Grenoble is a model for the treatment of waste, the development of green infrastructures, the absence of excessive noise, among other strategies to minimize human effects on the environment.

In this city, the effects of climate change are apparent as glaciers melt and heat waves increase in intensity and frequency. Since the preindustrial average, Europe has warmed by nearly twice the global average to 1.99 degrees hotter on average, much faster than models had predicted. During heat waves this summer, many discussions with colleagues over lunch turned the idea of a personal carbon budget and how this could guide lifestyle choices. Grenoble’s citizens participate in reducing emissions in a variety of ways such as using bikes, trams, and buses as primary modes of transportation and institutions encourage the sorting food waste and garbage, as depicted in the video clip below.

Cafeterias where most people eat lunch during work serve meals on reusable serving dishes and encourage the sorting of food waste for proper disposal. Office waste is similarly sorted into specific categories of recycling and trash to ensure correct recycling is maximized. 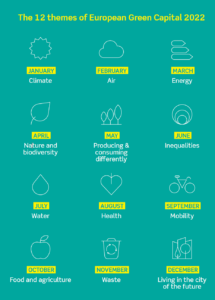 During Grenoble’s year as the European Green Capital, 12 themes of 54 challenges have been established to encourage change, as depicted below. These challenges range from those for individual citizens to companies and institutions. Environmental and social actions are guided by the motto, “je pense, je rêve, donc j’agis,” which translates to, “I think, I dream, so I act.” This is similar to René Descarte’s philosophy of “je pense, donc je suis,” or “I think, therefore I am,” although this modernized statement encourages the imagination of a better future supported by the action necessary to turn this into our reality.

The goal of the European “Green Deal” is to improve the health and well-being of its citizens by reducing pollution and expanding access to green spaces. Across the world, we should consider these goals to create the best current and future world possible. “Je pense, je rêve, donc j’agis” can become our guiding principle for all issues from climate change to social inequities to scientific innovation and discovery.