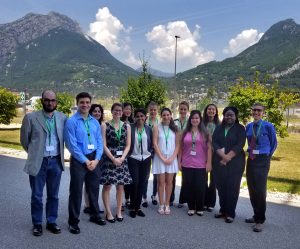 R. Composto (far right) and P. Rannou (far left) with REACT team at the French-American Workshop at GIANT in 2017.

Russ Composto was awarded a 1-month Invited Visiting Professorship to be used during the summer 2018 from the Communauté Université Grenoble Alpes (ComUE UGA). He will be hosted in the labs of French REACT researchers, Said Sadki and Patrice Rannou (REACT GIANT PI). This award will facilitate Prof. Composto’s collaborations with French partners, the organization of a soft matter workshop, and more time to work with our US REACT student researchers at GIANT in 2018.